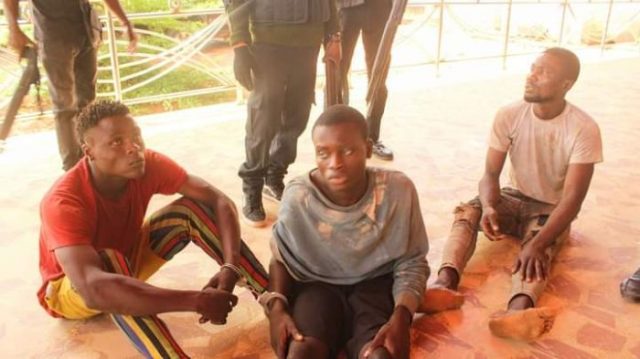 Operatives of the National Agency For Prohibition of Trafficking in Persons (NAPTIP) along with vigilante operatives in Anambra State have detained three people for raping a 13-year-old girl.

Chidimma Ikeanyionwu, the Commissioner for Women and Social Affairs’ media assistant who made the arrest announcement, said the suspects had been turned over to the police and would soon face charges in court.

The accused were co-tenants with them, the victim claims, but after getting into a fight with her father, they brought her to the Nkisi River to rape her.

The woman described her ordeal to the commissioner, saying that the lads had initially slapped her before dragging her to Nkisi and ordering her to take off her clothes while the accused alternated having sex with her.

According to information obtained by NAIJALOADED, the victim is from Ohaozara in Ebonyi State, and the identities of the perpetrators are Sunday, Emelie, Chiedu, and Nwa aw.

The fourth suspect, Nwa aw, is claimed to have escaped when security personnel entered the neighborhood of Nkpor, close to Onitsha, to arrest the three others.

Hon. Ify Obinabo, commissioner for women’s and social welfare, praised the victim for stepping out after the incident and promised to see to it that justice was served.

She bemoaned the state’s rising rape occurrence rate and sounded the alarm that the administration, led by Professor Chukwuma Soludo, would not tolerate such behavior.

The Anambra Vigilante Group, Nigeria Police Force, and NAPTIP personnel were also thanked by Hon. Obinabo for helping to catch the offenders.

READ ALSO:  Ifeanyi, the son of Davido, allegedly drowns and perishes in a swimming pool

One of the suspects claimed he was simply present when the incident occurred, but the victim stated that despite his claims, he was the second person to have had carnal knowledge of her.

Two of the suspects admitted to the crime and begged for forgiveness during interrogation.

They added that their quarrel with the girl’s father was a factor in their decision to rape the girl.

They have been turned over to the Police State CID in Awka, where they will appear in court to face charges.